Central Park is one of the most beloved places to bike in New York City.

On a bike, you can experience a lot of the famous Central Park in a short amount of time and have plenty of opportunities for photos, food, sightseeing, culture, play, and relaxation. The park provides three long-distance routes to choose from – 6.1 miles, 5.2 miles, and 1.7 miles. According to the Smithsonian, Central Park is designed to be a microcosm of New York state: It features manicured, formal sections like the wealthier suburbs up north as well as tranquil, lush sections with benches and gazebos like the Catskills and the Adirondacks. The vast size and varied beauty make biking the perfect way to explore Central Park.

Here are 8 of our favorite bike paths in New York City:

Begin surrounded by forest and end enjoying the ocean breeze. You will ride the length of the Ocean Parkway Coastal Greenway, America’s first bike path (established in 1894).

For challenge and excitement, check out the free-ride trail and speedway trail for bumps, drops, and inclines. Then, bike over to the lush, majestic sanctuary of Fort Tryon Park, the city’s largest public garden.

This car-free oasis offers cycling, culture, play, and sports. It’s a dynamic venue for art installations and performances. Enjoy a waterfront view of the Statue of Liberty and lower Manhattan skyline.

After crossing the Manhattan Bridge into downtown Brooklyn,  explore along the waterfront into Williamsburg and over the Williamsburg Bridge back into Manhattan. Brooklyn is wonderful to explore by bike!

This loop unites Jamaica Bay, Brooklyn, and Queens, offering plenty of opportunities for nature and culture excursions along the way. 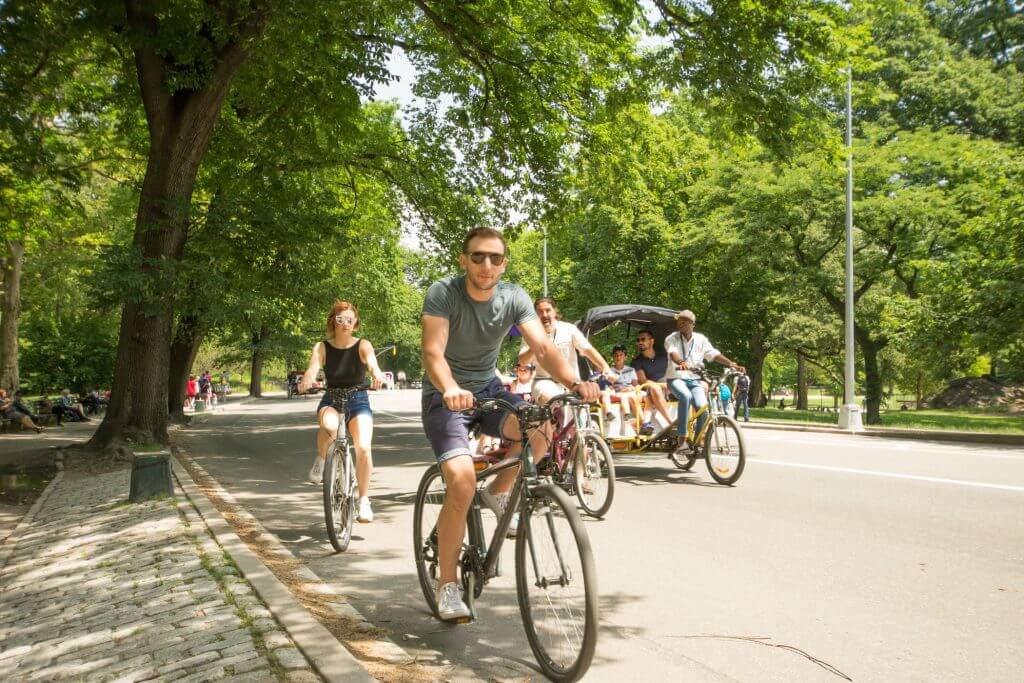 On the quintessential NYC bike ride, you will see fields, flowers, wildlife, architecture, statues, and bodies of water. You can make a picnic outing out of it.

15% Off Applied At Checkout.

We noticed there's already a reservation in the cart. Are you sure you'd like to replace it with this reservation?